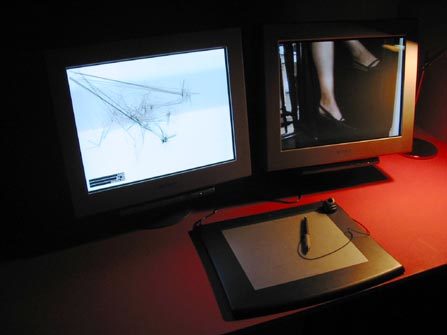 The installation is based on two screens put side by side, interracting one with another through the touch of the spectator. On one screen an algorithmic drawing is created in real time by both the spectator and the program. As the handling creates new figures, it reprograms the film, and the audioelements, seen on the other screen and becomes sort of witness, the incarnation of the conversation between the performer and the program. This object, influenced by the movements of the relation, becomes one of the characters of the movie, perhaps even a narrator influencing our vision of the story.

Lipstick Traces proposes an experimental tool for what we used to call « interactive cinema ». It explores the capability of a graphic interface to build cinematic narratives in an interactive situation and interrogates the place these different elements take in the interactive cinema, by transforming the interactive graphics into one of the main characters of the film, meanwhile the manipulation of the object becomes an aesthetic experience.

Jean-Michel Géridan is born in 1977. He is living in Paris, France. He is artist