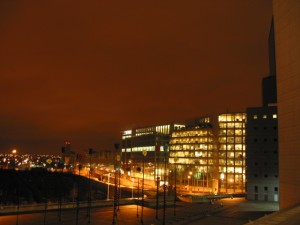 Kiasma Theatre, Sat 16th at 17:00
RYBN will release a real-time performance system, where projection of pictures, odours spreading and sound diffusions enter in interaction. Multisensory databases constitute the raw material of a plastic experiment, the common vocabulary of performers from which they establish a dialectic link. From a principle of improvisation, they create a mental universe, a representation built by successive layers addition.

Visual Layer: Video sequences, projected on the centre of the stage, are made up of digital photographs series, structured by micro- movements. Photographs are taken at night, with long exposure. They try to represent « architectural objects », urban deserts without human presence. The photographic series are about life space sectorisation, about which the division is set by urbanism. The spaces are represented in a poetical way: sequences, under an unremarkable appearance, reveal ambivalence, an inscrutable/ impenetrable reality. The human being has disappeared, awarding these spaces an abstract dimension, elevating them to the rank of subjective objects. The aesthetic bias is referring to the « uncanniness ».

Sound Layer: The sound element is created in real-time, with a multiplicity of creation platforms (poly-software), and a plurality of sources (recordings, samples, loops, numeric / analogical / acoustic instruments, silences). The process is based on the tolerance threshold, auditory extremes and their contrasts. RYBN plays with the deletion and corruption of reference points and perceptive reflexes linked to music (rhythm, loops and melodies), the perversion of musical material to the benefit of Sound.

Olfactory Layer: The olfactory element is based upon a control-command technology, regulated through a digital interface. Used on a sequential mode: as a musical score, the « olfactory score » is played by spreaders placed in the performance space, spreading smells at controlled frequencies and intervals. The olfaction is used as an abstract driving force: smells, extracted from its initial sources, are used as a link between olfactory memory and its attached symbolic to the collective unconscious. The olfactory layer would be able to moderate, qualify and contrast or contradict the perceptions.

Audience: The audience has to reconsider their habits of perception, and recombine the different signals. They are at the heart of a sensory immersion experience which question and test our perceptive systems and our cognitive principles. 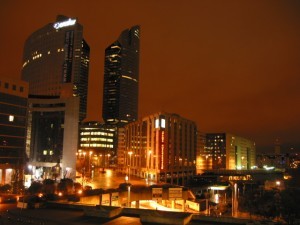 RYBN is questioning Language, deleting contextual links – sound/ pictures , odours/referent, etc… – to recreate new unpredictable, improvised links. The collective is reappropriating the dreamy field texture, where spatiotemporal and sensory elements are interlocked, permeable to each others.