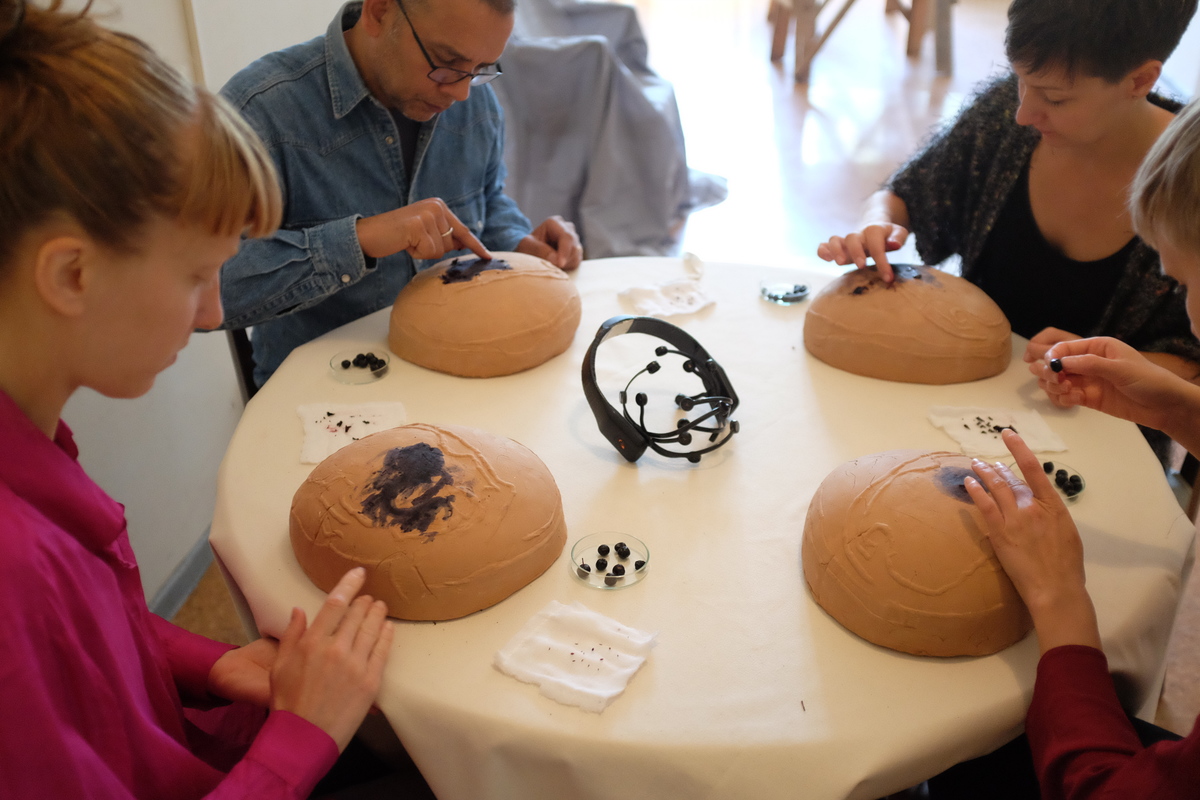 These title statements were proposed by Oliver Kochta-Kalleinen in the second of two gatherings about Pixelache member motivations and values in mid-April 2017. We were looking for answers. I had offered to facilitate.* This post is a reflection on the process, and presents a proposal for an updated description of Pixelache Helsinki.

To be honest the mid-week physical gatherings were not well attended in person, and question marks could be asked if it was to do with the subject, the arguably uncool approach to the topic, as well as meeting fatigue. Recently there have been many processes too complex to unpick here. However, we did receive 16 responses from members to a template sentence structure which aimed to elicit personal motivations and what got them—or keeps them—involved.** It was good to get these responses, to ‘check-in’ so to speak with where each member as ‘at’ psychologically in the organization. We have just over 30 members, with about one third active regularly at the moment, a handful ‘sleeping’ and, furthermore, 3 who said they did not feel motivated to respond to the internal survey. So, with reply from half, we had something to work, discuss and feedback on. As a bunch of friendly subjectivities, the majority of responses gave a nice warm but fuzzy psychological hug, but only hinted towards a clearer collective ambition or agenda definition. Hence the wish to ask for more about: (I think) We..

What follows the dots, the waiting around to fill in, and complete such a statement, can and does help develop awareness of collective intelligence, solidarity and cooperation among a group of people. We celebrate our diversity, criticality, agility, creative pragmatism, inclusive and open(-minded) qualities. Solidarity, care and empowerment. Starting from the imagined singular perspective of the collective, even a handful of responses leads towards better shared understanding of what we might have in common among our differences. To a raised awareness about what the association as a whole believes in; what is its collective agenda for operating in the world. Something that is possible to distill or make an essence from, maybe an elixir. To drink, and boost life together.

When is the right time for a cultural association to reflect upon how it describes itself, it’s member motivations and values? Consider the internal, self-reflective influences in an organization. For example, around the time of annual meeting when ideally many association members gather? Or when there are many new members? Following an unexpected annual budget cut? With a change of coordination staff? Or indeed when the association starts a totally new model of production and redistribution of its resources?

In Pixelache's case all such mentioned factors above are recent facts to take into account. In addition, there was also most recently a high-profile and much lauded Pixelache Helsinki festival in 2016 themed ‘Interfaces For Empathy’, and successful foundation grants awarded for collective curatorial experiments. There has been much reflection in the past year on how to organize an association in a new decentralized manner, which is now implemented with support of a new micro-tasking model, democratizing labour in the organization.

Why is this important? Such deep reflection on why we do things together is back-dropped with the contemporary times of multiple social, ecological, economic stresses in overlapping environments. These are affecting how we imagine the future—with its potential affordances and limitations—and how we can do things together to make our localities, urban and rural, communities and habitats better places to live, decay and die with each other; us humans and non-humans, wetwares, softwares, hardwares, naturecultures and machines. If we wish to take action and have cultural influence in our local, regional and international context, we need to know our individual and aggregate strengths, weaknesses, and the influences that motivate us to engage in private or public physical places, as well as in social and online networks. What sort of media art cargo-cult are we? Pixelache Helsinki over the years has played within and benefited from ambiguities and emerging hard-to-describe practices and curiosities. But still we meet activists & collaborators with agendas of their own, who demand before cooperation: Who are we, and what do we stand for?

After listening to feedback from a handful of other members, an optimistic toast to the future..This is proposed as an updated descriptive word-potion for us and for others we meet:

Pixelache Helsinki forms a cultural compost of activism, art, design, and research. It is characteristically hard to describe, often trans-disciplinary, and carries a DIY-DIWO [Do-It-With-Others] open-source and hacker spirit, agile in emerging practices, ecological, social and/or technological experiments. It is an association of artists, cultural producers, designers, doers and thinkers as activists in society and networks. It has curated an annual festival since 2002, and operates as a decentralized production collective with collaborators locally, nationally, bio-regionally and internationally. We promote caring, commons-orientations, critical sustainability, diversity, solidarity, and sharing. ***

* I have often taken this role in Pixelache Helsinki in the past, both as volunteer and staff, one of the most ‘elder’ members in regards to time spent with the association, and so know more or less all members, including the ‘sleeping’ ones. My presence in the motivation & values workshop on 18th & 19th April evenings was supported with a travel ticket via the new internal instafund to distribute Pixelache funding resources for quick-fast processes or needs. One of the conditions of this support is to write a public report of how it was used via the Pixelache.ac blog.

*** Update November 2019: We still haven't officially agreed this new description, and it has never been used in our funding or reporting documents. Maybe for 2020, we will step forwards or out of the cultural compost into public ;)

Image credit: Antti Ahonen, Image is not us in the motivations' meeting, but is added for poetic association. It documents Bartaku's BERRY BABE - A[L]LIVE SCENE / INSTALLATION that was featured in Pixelache Helsinki 2016 Festival.