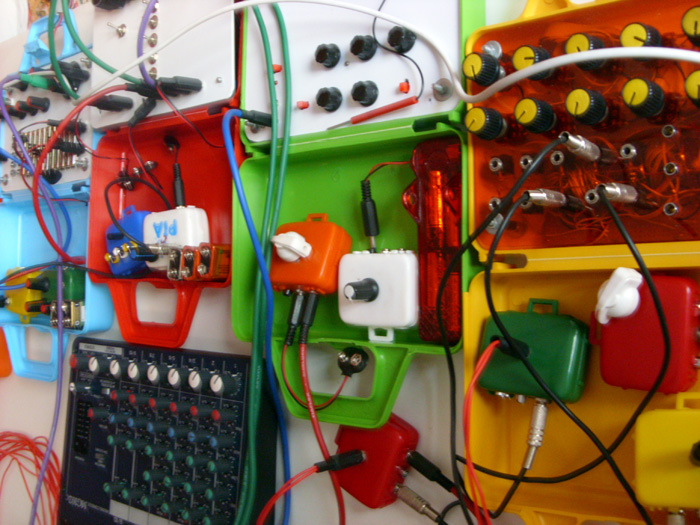 Cristiano Rosa (Brazil) / Performance + Circuit Bending workshop
17 November 2010, Juha Huuskonen
Does Brazil beat Finland 26-0 in circuit bending, like in football? This is your chance to find out ;)

After the Piksel festival in Bergen, Cristiano Rosa from Brazil is coming to Helsinki:

Concert and workshop by Cristiano Rosa from Brazil

"Short lived like a butterfly" is an audiovisual performance that uses unique electronic instruments, delicate and unstable, built by the combination of assorted materials found at electronic debris, using Circuit Bending. These devices when played together generate electrical signals that reach a wide range of frequencies (from audible to ultrasonic). Depending on the combination of these signs, to locate its source is impossible because the space is filled with this mass of sound that resonates in our body. The instruments are unstable and sometimes they can simply stop, creating a constant risk during the presentation. All these malfunctions or glitches turn part of the improvisation.
>> www.panetone.net

Finnish circuitbending & hardwarehacking crew will show you some recent projects, and play some dirty and experimental music.
>> www.koelse.org

Christiano will also be teaching a workshop on hardwarehacking and circuitbending.

- Opening of the workshop and objectives
- Introduction about the artist - panetone
- Presentation of instruments created from the art of Circuit Bending
- Concepts and axioms
- Hands on
- The Electronic Device
- Opening the device
- Identifying the electronics on board
- Choosing your control layout with LDR, potentiometers, resistors and diodes
- How to properly mount control hardware
- Installing pitch adjustments and audio output jacks
- Marking the best points and finding bendings
- Assembly of the controls and fine tuning your bends
- Basic soldering
- Drilling and cutting plastic
- Registration graphic design and labeling your controls
- Closing
- Comments on Circuit Bending and Hardware Hacking
- About the authors, bibliography
- All playing together

Cristiano Rosa works with experimental music since 1989, through feedbacks, smashing loop tapes and metal percussion found in garbage. 1990-1999 he collaborated with other experimental artists in expositions, installations and performances. 2000 he had a solo project called Jazzymenow and made live p.a. at Goethe Institute Porto Alegre. 2001 founded a cassette label: Crackerjack.

2010 started a South American collective Sudamerica Experimental with Chileans and Argentinians. The project began with the intention of becoming a platform for exchange and collaboration between projects related to musical and artistic experimentation in Latin America. In the 3 years played concerts and organised circuit bending and hardware hacking workshops in 12 Brazilian states with more than 700 participants.