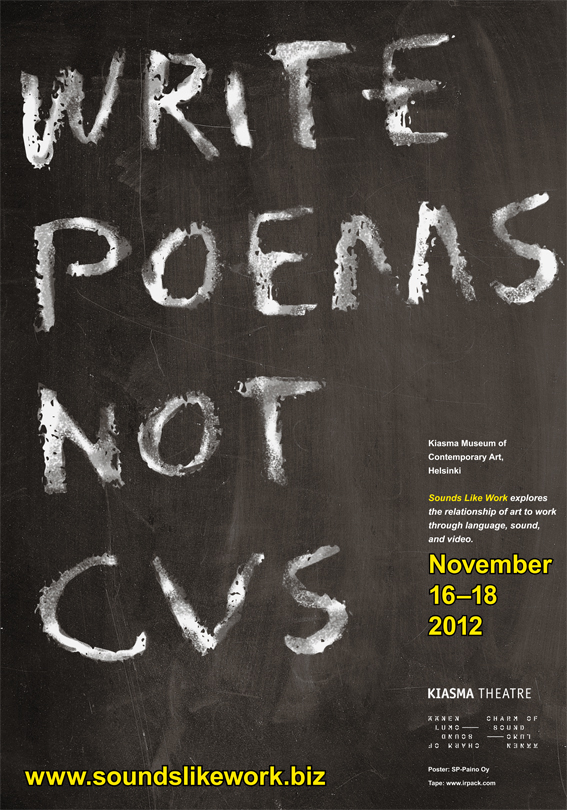 When more or less everything – including art – is turning into work, what is freedom?

· Presenting works of art, which have the ability to show us how to be free

· Discussing art policies that deal with the practicalities of freedom

The Scottish musician and artist Bill Drummond brings his choir project The17 to Sounds Like Work. Questioning our ideas and attitude to sound, Score 368: The17 VERSUS GUITARS will be interpreted at the Kiasma Theatre by a group of singers who also form the audience of the performance. “I wanted to make music that was not a product, music that if you wanted to hear, you had to be part of the making of it,” Drummond explains. “Music, no matter how much you searched the internet, you would never find.”

The event will also see the debut of Madgermany, a musical movement started by the Berlin-based writer and artist Ingo Niermann. Transcending nations and humanity, Madgermany possesses nothing and grants its members neither rights nor duties. Everyone is free to take Madgermany over or to start another Madgermany. In Helsinki, Base Central Madgermany offers lyrics, instrumentals, videos and manuals for DIY.

· Text and remarks by the organisers and guests

In the manner of musicians, or dilettantes, the curators of Sounds Like Work, Kimmo Modig and Jenna Sutela, play work instead of working on it: ask for a CV and a protest song is what you will get. Modig is an artist, sound designer and producer. Sutela works with words, structures and sound in the fields of art, design and media. Their undertakings from management to content production have been made transparent in an open office at Kiasma on 2-21 October 2012. The event is organised by Äänen Lumo.