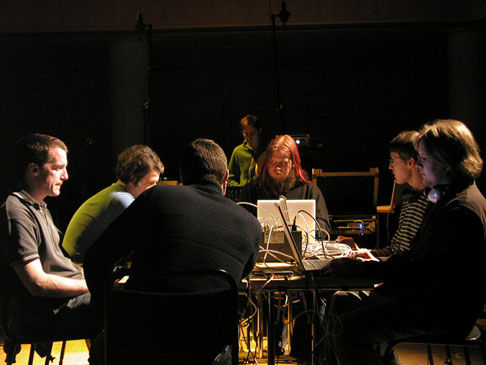 Take a radio ride on Freedom Highway with Emmanuel Madan in a disturbing portrait of American Empire as heard from the inside.

Presented by Sophea Lerner and the Centre for Music and Technology, Sibelius Academy. With a commitment to bleeding edge technology, anything can happen!

The 1983 radio classic by Ferdinand Kriwet ‘Hortext 16’ will be recreated for the internet radio age as a live streaming public event. Kriwet’s mission to ‘create a polyphony of the world history of radio’ by collecting radio broadcasts from around the world and editing those into a 36 minute and 9 second montage creating what he called a ‘fictitious world radio.’ Today that world radio is a reality, which will be performed by volunteers harvesting live audio streams worldwide, edited and mixed to create Hörtext v 16.1.

Prototyping the global bridge symphony, an experimental networked multi-location bridge streaming performance playing the cables on the Matinkaari and Heureka Silta bridges in Helsinki. The mixed streams will be broadcast on ääniradio, online ääniradio.org and in person at the chamber music hall of sibelius academy, with live video and electronic music improvisation.

Beginning in September 2002, Emmanuel began driving through the United States and recording talk radio shows and religious programming on the AM band. The result is edited and remixed into a disturbing portrait of American Empire as heard from the inside.

Emmanuel Madan is a musician, composer and sound artist based in Montréal, who works in radio broadcasting as an engineer, journalist, producer, programming director and DJ and produces collaborative installation projects as [The User]: Symphony for dot matrix printers and Silophone.
www.freedomhighway.org